Do not underestimate the power of asking for that which you desire. In business, it is generally expected that after the “pitch”, comes the “ask”. It must be in that order, too. Why would a buyer or potential client do business with someone else, without knowing all the facts first? As Realtors, we rehearse our presentation and practice eliminating objections, but we give little consideration to actually getting the ink on paper. Too often, business people sit back after we have shown all the graphs, answered all the questions, and simply STARE at the prospect. The prospect finds this really creepy, by the way. Without asking for the order, the default answer is always “No”. Perhaps worse than not actually asking for the contract, we may give the feckless “so, what do you think”?

Asking also plays a big role in charities, recreation, and civic organizations as well. Years ago, I was curious as to why there wasn’t more participation in the annual Chili cook-off in my real estate office. The Managing Broker of the company told me, “Some times, people just want to be asked”. That really struck me as odd. This was something we did every year in the Fall, and everyone always partook and had fun. So, it’s not like people didn’t know to enter the contest, especially since it was posted, mentioned in a meeting, and followed up 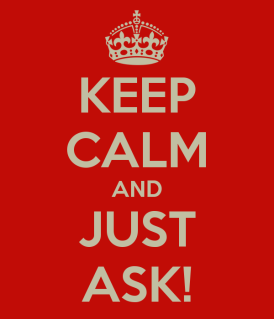 in email. After all, if an opportunity was available, or a position open, such as “Snack Chairman” for the high school volleyball team, wouldn’t people just raise their own hand, and say; “yes, I would relish the opportunity to be the Snack Chair this year”. I followed her guidance, and sure enough, we were able to double the participants, and everyone enjoyed the party.

Some time later, that same real estate broker needed to fill an Office Manager position at the firm. She must have had over a dozen applicants. She selected three or four potential hires for an interview. After the process, she confided in me, her decision came down to the one interviewee who actually ASKED for the job. I was under the assumption being grilled for twenty minutes on what animal you would be if you lived in a forest, WAS asking for the job. Apparently, not. The lady stated how much she really needed the job, and actually vocalized the words; “Will you hire me?”. Turned out, she was a really good fit for the office, and she never for a second indicated she took the position for granted.

Seeking a favor puts us at a disadvantaged position. When negotiating, we want to come from a position of power and strength, but in asking, we admit the ball is in the other person’s court. Many times, the ball IS NOT in our own court, and coming to that realization puts a knot in our stomach. Nonetheless, formally requesting the business is where the rubber meets the road. Even being denied your request is certainly a better position to come from than; making your presentation, dodging objections and being grilled for half an hour, only to toss out “So, what do you think” in the end. My advice; swallow your pride, and just ask! 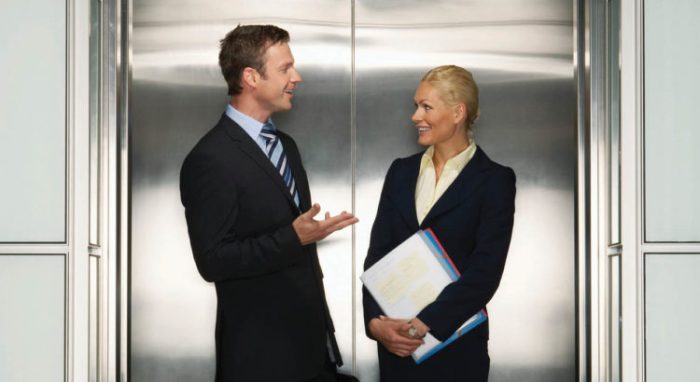 Imagine hopping into an elevator to meet with an existing client on the 14th floor. You overhear the lady next to you state to a coworker she needs to purchase a new Acme model no. 5, extra-large green widget for the downtown office. Wait a minute; YOU sell Acme no. 5, extra-large green widgets! It’s time to spring into action, but you have less than a minute before the elevator reaches the 14th floor and your new prospect gets away. No time for the Power Point, just enough information to pique curiosity, and set an appointment. That’s an “elevator speech”.

Of course, it need not be in an elevator, escalator, or restroom stall. For those of us in sales, we might have this prepared already. But have you practiced it lately? For those of us not in sales, it’s a good idea to develop one for your church, civic club or next job interview.

According to Mindtools.com, there is a simple six-step formula for creating your own “sales pitch on the fly”.

1 – Identify your goal. What is it you wish to accomplish? To set up a sales presentation or get the name of the decision maker?  just to find out if the strangers organization is hiring or do you actually want to set an interview? At this stage of the game it is probably best to tread lightly and simply get the contact information.

2 – Explain what you do. What do you want your new found friend to remember most about what you say?

3 – Communicate your uniqueness. What makes you different from all the other salespeople? Is it your experience or an innovative approach?

4 – Engage with a question. Take the “temperature” of the receiver rather than trying to convince them of something. “Does that sound like something your company needs?”

5 – Put it all together. Make it informative, yet very concise. Always include an initial “ask” that isn’t too pushy.

6 – Practice. Louis Pasteur stated; “Chance favors the prepared mind”, so be ready! Remember, a “sales pitch” is a SPEECH. All great speakers and actors have to know their lines. You have to practice it, if it is to be effective.